Early this spring while I was shopping for seasonal plant selections for my front entry garden, I came upon a bronze fennel plant.  This particular section of the garden at the time exhibited a trio of bronze sedges, blue fescue, and black and blue sage. I felt like this group of plants along with the bronze fennel would create complementary colors and texture. Which it did, so I was very pleased. 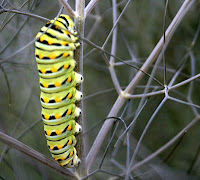 However may biggest surprise occurred when 10 to 12 larvae turned up 5 weeks later turning my fennel plant into a bare boned skeleton.
I used to work for a plant protection products company ( that's a political correct term for pesticide and fertilizer distributor), so I thought what insecticide do I need to use to eradicate this pest?  Orthene, Spinosad, Sevin, or  Bacillus thurengnsis Kurstaki?  Some of you have probably heard of some of these.Well about that time my 9 year old neighbor Eli came along and I showed him the "worms", he replied "cool".  Hmm, I thought to myself as I had been explaining different gardening terms to Eli over the last month or so. So I decided to  give Eli some more education, I purchased a plastic insect container from wally world and added fennel leaves with the worms, err larvae. Soon the larvae quit eating and started attaching to the container to turn into chrysalis for 12 days. I sent the container home with Eli and received very exciting reports from his mother and him almost on a daily basis. Soon the Swallowtail Butterfly,  (Eastern Black Swallowtail, Papilio polyxenes), begin to emerge and Eli came running to my wife so excited he almost tripped over himself. She told him to release them so they wouldn't hurt themselves. 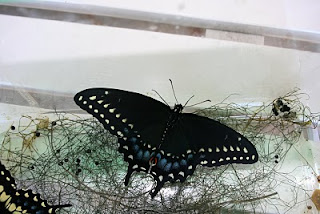 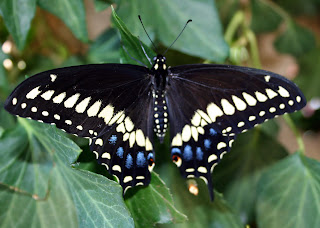 Over the next week Eli would release a butterfly a day until he left the final two and returned them to me and allowed me to view this amazing metamorphism from larvae to adult. Those two were the last two we captured as we didn't want to injury them. That was in late June and about every 7-10 days more larvae would show up on the fennel and then in another week the butterflies would show up again. For the last 6 weeks I have been blessed with a contiual cycle of swallowtails and the larvae continue to show up consistently.
My poor fennel plant, the ultimate sacrifice. Its health and life for rebirth of these magnificent creatures.
Hmm, sounds like someting I've heard before.

2 Corinthians 5:17
Therefore, if anyone is in Christ, he is a new creation; old things have passed away; behold, all things have become new. 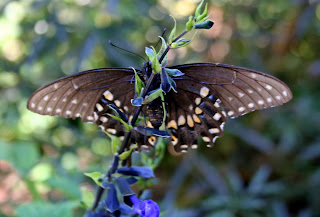 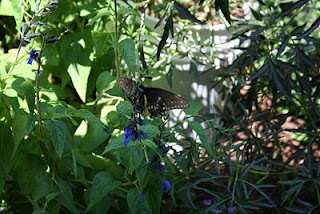 Art at the Arb

greggo
My mother got me interested in gardening when I was young boy. When I was in my early 20's my girl friend (future bride), influenced me into going back to college and study landscape design. Of course this kept me interested in horticulture throughout my life. Gardening is my passion and therapy. I have gardened in 5 different states and 5 different growing zones. Have mucked through clay in Texas, Oklahoma, and Kansas. I am truly amazed how God blesses us with His creation. Blessings, Greggo